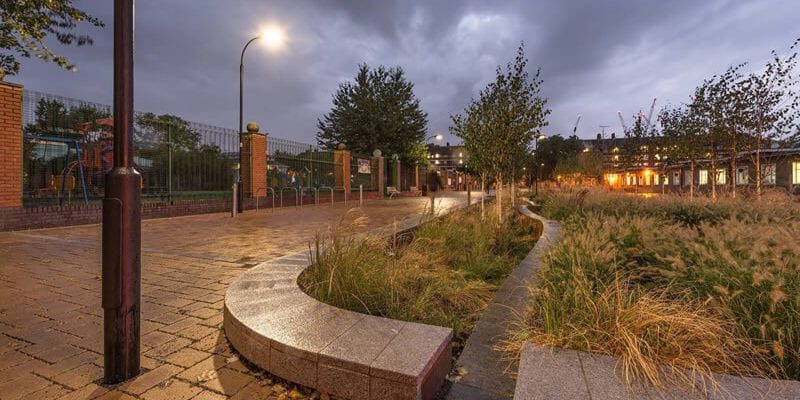 We are surrounded by numerous examples where the landscape does not provide any tangible management of rainfall, and runoff is quickly conveyed underground into pipes that can quickly become surcharged, writes Anthony McCloy.

The recent Australia Road SuDS Park in London exemplifies an integrated design approach to deliver a successful green and social community ‘oasis’ that both protects against flooding and significantly reduces the volume of storm runoff from the site to be treated at the wastewater treatment works.

If both Engineer and Architect work in unison the benefits of more flood resilient landscapes that offer improved functionality and attractive surroundings for the community, all at reduced construction cost, are easily attainable. A recent example of this type of joined-up thinking is the delivery of the Australia Road scheme in the White City area of northwest London. Whilst the initial focus of the scheme was urban regeneration, the client quickly realised that redevelopment was an ideal opportunity to introduce SuDS as part of an integrated landscape within the Borough. In this way, SuDS can be viewed as an asset to enhance the character of the landscape/scheme rather than storing runoff out of sight in an underground tank which would have provided no other benefits other than storage of runoff.

The notion that water has a valid place in the landscape (even in densely populated areas of London) was emphasised at the first stakeholders meeting. The head of the resident’s committee outlined his vision for the scheme as

“the creation of an urban oasis”

which would draw people in and create a social hub for the local community. Notably, health and safety in relation to open water regardless how temporary or shallow was not raised as a key concern.

Designing for the ‘Host Community’.

With the mission statement enshrined, the McCloy Consulting and Robert Bray Associates set about designing a space that tells the story of water in the landscape by mimicking drainage in the natural catchment. Space was designed to be shared and enjoyed by users of the adjacent school and playgrounds as well as the wider community. This was a fundamental design driver as the scheme lies between the school and playgrounds at the heart of the White City estate. This presented the opportunity for the redevelopment to become a social catalyst by providing much-needed social and events space whilst delivering much wider benefits by using the landscape for climate change adaptation, improving flood resilience and reducing the impact on the receiving sewer and wider environment.

At the heart of the design is a range multi-functional SuDS features including planted basins, raingardens and rainsculptures. The majority of resurfacing was completed with permeable paving, which captures the rainfall and directs it immediately below the surface of the pavement to two planted basins. Significant onsite constraints were present such as high voltage power cables and concrete slabs that formed the substructure of the existing roadway.

McCloy Consulting, the project Engineers, adopted an innovate approach for the permeable pavement design to reduce costs and minimise requirements to digout existing concrete with permeable pavement being formed directly onto the slab no more than 200mm deep. This enabled the main basins to be designed by Robert Bray Associated as shallow features that sit comfortably within the landscape.

The hydraulics of the flow controls designed by McCloy Consulting restrict flows to below 1 litre per second. This is a different approach to that which would normally be applied and it provides greater benefit to the receiving combined sewer, reducing CSO spills, risk of urban flooding and significantly exceeding normal compliance requirements without any additional cost to the client.

Success and Looking to the future

This innovative project was completed in September 2015 and showcases an exemplar of how SuDS can be successfully integrated as part of the landscape of our towns and cities. The scheme has received ICE and Sustainable Ireland Awards.

McCloy Consulting (who have offices in Belfast, Dublin and London) are currently undertaking a two-year monitoring study to assess the impact of the scheme on peak and base flows to the combined sewer. The outputs from this study have the potential to inform future strategies for runoff management as part of citywide regeneration projects.

Working as an Engineering Technician at McCloy Consulting
19th February 2021

Working as a Project Engineer at McCloy Consutling
11th February 2021

Go to Top
We use cookies on our website to give you the most relevant experience by remembering your preferences and repeat visits. By clicking “Accept All”, you consent to the use of ALL the cookies. However, you may visit "Cookie Settings" to provide a controlled consent.
Cookie SettingsAccept All
Manage consent

This website uses cookies to improve your experience while you navigate through the website. Out of these, the cookies that are categorized as necessary are stored on your browser as they are essential for the working of basic functionalities of the website. We also use third-party cookies that help us analyze and understand how you use this website. These cookies will be stored in your browser only with your consent. You also have the option to opt-out of these cookies. But opting out of some of these cookies may affect your browsing experience.
Necessary Always Enabled
Necessary cookies are absolutely essential for the website to function properly. These cookies ensure basic functionalities and security features of the website, anonymously.
Functional
Functional cookies help to perform certain functionalities like sharing the content of the website on social media platforms, collect feedbacks, and other third-party features.
Performance
Performance cookies are used to understand and analyze the key performance indexes of the website which helps in delivering a better user experience for the visitors.
Analytics
Analytical cookies are used to understand how visitors interact with the website. These cookies help provide information on metrics the number of visitors, bounce rate, traffic source, etc.
Advertisement
Advertisement cookies are used to provide visitors with relevant ads and marketing campaigns. These cookies track visitors across websites and collect information to provide customized ads.
Others
Other uncategorized cookies are those that are being analyzed and have not been classified into a category as yet.
SAVE & ACCEPT